Welcome, Anna Patricio to talk about her new book ASENATH.

WHY ASENATH?
by Anna Patricio

Mention Joseph to anyone the street and they will be able to tell you,
"He's the dreamer. The one with the coat of many colours. The one who
can interpret dreams." Some will even say, "The one in that
technicolour musical," which I personally don't care for much.
(I prefer the movies 'In The Beginning' and 'Joseph King of Dreams,' both
excellent portrayals of Joseph.)

But mention Asenath, and the reaction you will most likely get is, "Who's that?"

Indeed, hardly anyone knows about Asenath, and that is probably
because she is mentioned very briefly, eclipsed by her famous dreamer
husband. Whenever I tell people I have written about her, the reaction
I get most of the time is, "I didn't know Joseph had a wife!" If I got
a dollar every time that remark was made...

So why write about this little-known, obscure, voiceless name from the
Book of Genesis? Actually, the fact that she is little-known and
obscured provides great potential for fiction. Because barely anything
is known about Asenath, I am thus at liberty to stretch my imagination
as far as I please. All we are told about her is that she married
Joseph after he successfully interpreted Pharaoh's dreams. So I filled
in the (huge) gaps before and after that event.

That is just the surface, however. My other and more crucial reason
for writing about Asenath stems from my interest in Joseph, which
began when I was still a student.

I had known about Joseph's story all my life, what with having
attended Sunday school and all. But it was later on when some dramatic
changes took place in my life - entering university plus my sister
needing surgery - that I came to realise what a powerful and moving
tale this is. Until then, I thought of Joseph as some distant figure
from a far-off time and place. But when I came across his story again
after the abovementioned events came to pass, I realised just how much
I could relate to him. I admired how he maintained his strength and
integrity, despite the numerous travails that befell him. Really, when
you think about it: first his mother died when he was only 8 (or so),
then he was sold into slavery, and then imprisoned for a crime he
didn't commit. That's a terrible burden to bear. But he survived it
all and emerged as a very seasoned man. I love how people often
summarise Joseph's Cinderella-esque tale as "from the pit to the
throne" because - well - that's what it really was.

My admiration for Joseph then drove me to delve deeper into his story.
I read everything I could get my hands on. First I began with Biblical
commentaries and studies, then later discovered more interesting
accounts, such as Jewish folktales and Persian epic poems.
Along the way, I grew curious about his wife Asenath. I wanted to know
what sort of women married so strong and admirable a person as he. But
when I looked her up, I found hardly anything on her. Oh, I found a
few ancient tales such as the Greek 'Joseph and Asenath' which has as
its theme Asenath's conversion to Judaism. But other than that,
nothing. Nothing to tell me of her childhood, her marriage to Joseph,
her family with Joseph etc.

I came across some contemporary fiction of Joseph, but I wasn't too
satisfied with how Asenath was portrayed, mostly because she wasn't
given much attention by the writers. She was almost always in the
background. When I didn't find anything I wanted to read about her, I
then thought to write something myself.

I played around with ideas for about two years. Then the ideas took
shape in the first draft of the manuscript, which I then worked on for
3 years. And now, after nearly another year of seeking publication,
'Asenath' has finally materialised.

Last week my girlfriend and I went to see New Years Eve. First let me explain why we decided on this particular show in the first place. We both needed a break and thought that a movie where you didn’t have to think was perfect.
Well, this movie was not only a no-brainer for us, but must’ve been something conjured up over a night of drinking for the screenwriters.

The plots were dry, predictable, and boring. The acting was even worse. This movie casted some of the top A list stars such as Katherine Heigl, Josh Dumal, Ashton Kutcher, Michelle Pfeiffer, Zac Efron, Robert De Niro, Halle Berry and Sarah Jessica Parker. So the acting potential was at a high standard and I have to say watching this movie was like watching one episode of the teletubbies. Over paid morons flopping around on screen. Ugh I’d rather give myself a paper cut between my toes.

Where do I begin?

The first story: Katherine Heigl and Jon Bon Jovi used to be engaged until he left her the previous New Years Eve. Jump ahead a year and she’s catering the New Years Eve gala in Times Square where he is the headliner. Hmmm I wonder what happens. Well, you don’t have to see the movie to figure it out. A lack of chemistry, bad acting and horrible writing spells blah!

Moving on to story number two: Michelle Pfeiffer and Zac Efron. She plays a frumpy middle aged woman looking to fill her list of things she’s never done. Zac is the man for the job. He is a mail delivery boy who gets around on a bike and motorized scooter which later Michelle drives, scratching one thing off her list. You watch as the two go from place to place in New York City but never find out why she needs to fulfill the items on the list. At the end of the movie Zac kisses the overly frumpy, and needs to put some cucumbers on her eyes, Michelle as they dance the night away in Times Square. One word defines this mess...Puke.

Story number three: Ashton Kutcher hates New Years Eve because his heart was broken a few years before during the holidays. (wah wah wah) He walks around in his pyjama’s ripping down all the decorations moaning about how much he despises the day. In comes Lea Michelle (Glee) and the two get stuck in the apartment elevator (go figure) The two fall for each other (again go firgure) Amid all the chaos of the movie Lea Michelle breaks into song. I am not kidding. This is not only cheesy but nearly caused us both to lose our popcorn right there. It was a good thing we were the only ones in the theatre because the profanity that expelled from our lips at this ridiculous scene would have definitely gotten us kicked out.

Story number four: Robert De Niro plays a dying man whose only wish is to go onto the roof of the hospital and watch the fireworks at midnight. Halle Berry is his nurse and sits with him until his daughter, Hilary Swank arrives. Oh goodness, where to start? After almost dying a few times throughout the show and merely hanging on by a thread his daughter takes his oxygen from his nose and wheels him to the roof top where he...yes you guessed it, dies. What did you think would happen?

And in comes another song, by Lea Michelle as all the couples come together in a New Year hug, kiss, or whatever. At this point my eyes were crossed and I was praying for the credits to roll.
There were of course other stories but these four took the cake.

If you feel I’ve ruined the movie for you, well I’m sorry. But look at this way; I saved you $20.00, your stomach from revolting, eyes from crossing, and your sanity. You can’t put a price on that!

Overall New Years Eve was a flop, a horrible waste of time.
Posted by Kat Flannery at 21:37 1 comment:

25 Days of Christmas at Imajin Books

There's only 25 days left until Christmas and the beginning of Imajin Books 25 Days of Christmas Giveaways event. 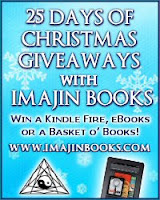 Imajin Books is Giving Away:

4 eBooks daily.
A basket o’ books (you choose the titles to fill it)
A Kindle Fire eReader.


The rules are simple:
Review one of their titles on Amazon or Smashwords.
Post an announcement on your face book page or Twitter.
Buy one of their eBooks.

It gets even better!
All eBooks are on sale from .99 - 2.99.
Imajin Books publishes Fantasy, Horror, Romance, Western, Mystery, Young Adult and more. They have lots of titles to choose from, so purchase yours now while their on sale!
Click here for Imajin titles.

With Christmas shopping in full swing, and your wallet constantly emptied, winning something is always nice. So enter your name in the 25 Days of Christmas Giveaways event.


Good luck!
Kat
Posted by Kat Flannery at 10:33 No comments: