Welcome, author Meg Mims of the Double Series to my blog today.

Meg, why did you write this series?

I was influenced by Charles Portis' True Grit, plus the 1969 movie version with John Wayne. The idea of a young girl whose father is murdered is the basis for Double Crossing, except my heroine is older than Mattie -- 19, almost 20 -- and quite sheltered and wealthy. Naive, I might add, which means Lily Granville's determination to track her father's killer brings plenty of unexpected education in life. It's a twist of True Grit and Murder on the Orient Express, as one reviewer said -- and won the 2012 Spur Award for Best First Novel!  had fun rolling LaBoef and Rooster Cogburn into my hero, Ace Diamond. And when I started writing the sequel, Double or Nothing, I decided to use dynamite like in the (non-Charles Portis) follow-up film with the Duke, Rooster Cogburn, with a different twist -- so check out the website www.megmims.com/double-series.

Double Crossing ... A murder arranged as a suicide … a missing deed  … and a bereft daughter whose sheltered world is shattered.

August, 1869: Lily Granville is stunned by her father’s murder. Only one other person knows about a valuable California gold mine deed — both are now missing. Lily heads west on the newly opened transcontinental railroad, determined to track the killer. She soon realizes she is no longer the hunter but the prey. As things progress from bad to worse, Lily is uncertain who to trust—the China-bound missionary who wants to marry her, or the wandering Texan who offers to protect her … for a price. Will Lily survive the journey and unexpected betrayal?

Excerpt:
I burst into the house. Keeping the flimsy telegram envelope, I dumped half a dozen packages into the maid’s waiting arms. “Where’s Father? I need to speak to him.”
“He’s in the library, Miss Lily. With Mr. Todaro.”
Oh, bother. I didn’t have time to deal with Emil Todaro, my father’s lawyer. He was the last person I wanted to see—but that couldn’t be helped. Thanking Etta, I raced down the hall. Father turned from his roll-top desk, spectacles perched on his thin nose and hands full of rustling papers. Todaro rose from an armchair with a courteous bow. His silver waistcoat buttons strained over his belly and his balding head shone in the sunlight. I forced myself to nod in his direction and then planted a quick kiss on Father’s leathery cheek. The familiar scents of pipe tobacco and bay rum soothed my nervous energy.
“I didn’t expect you back so early, Lily. What is it?”
With an uneasy glance at Todaro, I slipped him the envelope. “The telegraph messenger boy caught me on my way home.” My voice dropped. “It’s from Uncle Harrison.”
Father poked up his wire rims while he pored over the brief message. His shoulders slumped. “I’ll speak plainly, Lily, because Mr. Todaro and I were discussing this earlier. My brother sent word that George Hearst intends to claim the Early Bird mine in a Sacramento court. Harrison believes his business partner never filed the deed. He needs to prove our ownership.”
“Hearst holds an interest in the Comstock Lode, Colonel.” Todaro had perked up, his long knobby fingers forming a steeple. The lawyer resembled an amphibian, along with his deep croak of a voice. “His lawyers are just as ambitious and ruthless in court.”
Father peered over his spectacles. “Yes, but I have the original deed. I didn’t plan to visit California until next month, so we’ll have to move up our trip.”
“Oh!” I clasped my hands, a thrill racing through me. “I’m dying to visit all the shops out there, especially in San Francisco. When do we leave?”
“We? I meant myself and Mr. Todaro.”
I stared at the lawyer, who didn’t conceal a sly smirk. “You cannot leave me behind, Father. I promised to visit Uncle Harrison, and what if I decide to go to China?”
“Lily, I refuse to discuss the matter. This trip is anything but a lark.”
“It’s a grueling two thousand miles on the railroad, Miss Granville. Conditions out west are far too dangerous for a young lady,” Todaro said. “Even with an escort.”
“The new transcontinental line has been operating all summer. Plenty of women have traveled to California. I’ve read the newspaper reports.”
“I’m afraid the Union and Central Pacific cars are not as luxurious as the reports say. You have no idea. The way stations are abominable, for one thing.”
I flashed a smile at him. “I’m ready for adventure. That’s why I’ve considered joining the missionary team with Mr. Mason.”
Father scowled. “You are not leaving Evanston until I give my approval.”
“You mean until you dissuade me from ‘such a ridiculous notion.’”
“Need I remind you of the fourth commandment, Lily?”
“No, Father. We’ll discuss this later.”
My face flushed hot. Annoyed by being reprimanded in front of Todaro, I ignored the rest of the conversation. I’d always wanted to see the open prairie and perhaps a buffalo herd chased by Indians, the majestic Rocky Mountains and California. California, with its mining camps, lush green meadows and warm sunshine, the cities of Sacramento and San Francisco that had to be as exhilarating as downtown Chicago. I’d pored over the grainy pen-and-ink drawings in the Chicago Times. Uncle Harrison, who’d gone west several years ago to make a fortune and succeeded, for the most part, would welcome me with open arms. I plopped down on an armchair and fingered the ridges of the brass floor lamp beside me. Somehow I needed to persuade Father to allow me to tag along on this trip.


Double or Nothing ... A mysterious explosion. A man framed for murder. A strong woman determined to prove his innocence.

October, 1869: Lily Granville, heiress to a considerable fortune, rebels against her uncle’s strict rules.
Ace Diamond, determined to win Lily, invests in a dynamite factory but his success fails to impress her guardian. An explosion in San Francisco, mere hours before Lily elopes with Ace to avoid a forced marriage, sets off a chain of consequences. When Ace is framed for murder before their wedding night, Lily must find proof to save him from a hangman’s noose. Will she become a widow before a true wife?

Amazon for Kindle and print, B&N for Nook, Smashwords


Excerpt
I jumped at a screeching whistle. Men swarmed over the distant slope like bees over a wax honeycomb in a mad scramble. “Good heavens. What is that about?”
Uncle Harrison pulled me out of harm’s way. “They’re almost ready to begin the process of hydraulic mining,” he said and pulled his hat down to avoid the hot sun. “You’ll see. This is far better than panning for gold in a creek bed.”
“I can already see how destructive it is, given the run-off,” I said, eyeing the rivulets of dried mud that marked each treeless incline. “I’ve read about how the farmers can’t irrigate their fields and orchards due to the gravel and silt filling the rivers—”
Water suddenly gushed from two hydraulic nozzles in a wide, powerful stream. The men’s bulging arm muscles strained their shirts, their faces purple with the effort to control the water. I turned my gaze to the ravaged earth. Mud washed down into the wooden sluices, where other men worked at various points to spray quicksilver along the wide stretch. Others worked at a frantic pace to keep the earthy silt moving.
An older man with a grizzled goatee and worn overalls held out a canteen. “Have a sip while you’re waiting, miss,” he said. “A body gets mighty thirsty out here.”
“Thank you.”
I sipped the cold, refreshing ginger-flavored liquid that eased my parched throat. Dirt from the canteen streaked my gloves. Not that it mattered. At least the spatters of fresh mud wouldn’t show on my black mourning costume and riding boots. Two days of rain earlier in the week had not helped.
The kind man offered the canteen to Uncle Harrison, who brushed it aside with a curt shake of his head. Steaming, I bit back an apology. The man had already headed back to his position near the sluices.
Bored of watching the ongoing work, I wandered over to several horses that stood patient in the sun and patted their noses. A tooled leather saddle sat atop one gelding’s glossy brown hide, and the silver-studded bridle looked as rich. The horse gave a low whicker in greeting. If only I’d pocketed a few carrots or sugar lumps from breakfast.
“You’re a beauty. I wish I could ride you for a bit.”
The gelding’s ears dipped forward. One of the men left the knot of others in a huff. His dusty open coat swung around him as he stalked, spurs jingling, and closed the distance. He passed by me with a mere tip of his wide-brimmed hat and untied the reins. The horse pawed the ground, jittery, as if sensing the man’s foul mood while he mounted…
I trudged toward the shack. The foreman held a large piece of blueprint paper between his hands while my uncle pointed at various sections. Two other men argued with them, their heated words carrying over the whooshing of hoses and creaks and jolts of skeleton wagons over the rutted ground. Most of their argument was peppered with technical jargon that didn’t make any sense. Even Chinese sounded more familiar.
“We haven’t made enough headway,” said a man in a tailored suit, whose gold watch chain glinted in the sun. “I say we dig out the ridge all the way.”
“You take that ridge down any more than we have and we’ll never get equipment to the furthest point of the claim, over here,” my uncle said and prodded the map. “That was Alvarez’s advice. He knows this land better than you, Williamson.”
“I agree, it’s too dangerous,” the foreman said.
“I’m the engineer! Are you implying I don’t know my business?”
“I’m saying it’s stupid to undermine that ridge. You’re being a stubborn coot.”
“You’re a fine one to call me stubborn—”
Good heavens. I reversed direction and headed back toward the sluice. They were sure to argue for another few hours. I wanted to ride that horse, even if it meant hiking my skirts to my knees and baring my ankles. The poor animal looked like it a good run, or at least a trot over the rough ground. I had to do something productive or I’d go mad. Steering around the same boggy patch of mud, I cut close to the sluice. A blood-curdling yell halted everyone. I whirled to see the entire bank of earth, a huge avalanche of mud, rocks and two large trees root-first, rushing straight for me.


You can find Meg here: 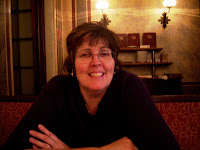