Please welcome to my blog Erika Knudsen, Paranormal author of Monarchy of Blood.


Hi Erika, why did you write Monarchy of Blood the third instalment to your vampire series?

I wrote Monarchy of Blood because I wasn't finished telling the tale of my vampires. I have many stories that my vampires still have to tell, but for now, with Monarchy Of Blood just released, I'll probably head back to the stories at the Azamaté. (Awakened) 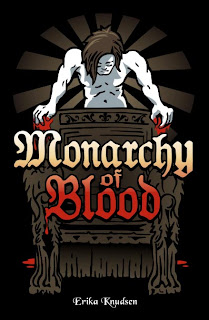 
... leaving me in the alley to die. That was when she had come to me. Her green eyes were fierce and her skin like porcelain.  She picked me up and wrapped me in her arms. Leaning in to kiss my forehead, her wavy red hair cascaded around me. Breathing in deeply, the mixed scent of flowers and vanilla calmed and aroused me. Her whole being exuded a calmness that washed over me. When her eyes locked with mine, I felt at peace. Closing my eyes, I absorbed the love I felt from her with my whole being.


It wasn’t until pain encircled my neck, like a barbed collar, that I woke from my daze. At first I was confused, not understanding the pain. I then realized that she had bitten my neck. Panicking, I pushed against this immovable living statue, but most of my protest I yelled within my head: I don’t want to die.  I felt my life fading away as I became weaker and weaker. That night she meant to end my suffering, but my silent fight for survival altered my fate.


Nineteen years ago, Erika Knudsen dared to walk in the shadows and never came back. At an early 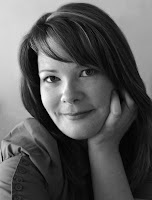 age, she was intrigued and mesmerized by suspense, horror, and drama. The idea of “creatures” coming to life at night was a scary and thrilling idea. After years of being a fan of horror and the supernatural, she took her fandom of the genre to the next level. Vampires being her number one obsession, she began writing Beyond The Threshold Of Death. It blossomed into something Erika could have never have dreamed of. Monarchy Of Blood is the third book in her vampire saga which will be released March 2013. Erika Knudsen resides in a quaint hamlet northwest of Edmonton, Alberta with her husband and dog where the dark country nights add to her nightmarish and twisting plots.﻿


~Dare to walk in the shadows~ www.erispublishing.com/blog