Welcome to my blog, Icysnow Blackstone, author of the THREE MOON STATION set to be released June 2013.

When Kat asked me, “Why did you write this novel?” I had an answer all ready for her, I wrote it because of a movie.

Murder on the Moon (also known as Murder by Moonlight) was a made-for-TV movie telecast in 1989. It stared Brigitte Nielsen, Julian Sands, and Gerald McRaney, and was the tale of Soviet/US astronauts on the moon trying to solve a murder happening in their midst.  One thing striking me during the story was that back on Earth, a scientist is missing and one of the investigators says, “Why on Earth couldn’t we find him?  Because he isn’t on Earth.”  Or words to that effect.


That got me to thinking…if you were a witness to a crime and no place on Earth was safe for you, what could you do?  If you lived in a time of space travel, the answer’s  simple…just hop a ship to another world. 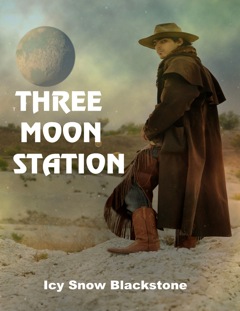 In my novel Three Moon Station, that’s exactly what Kathryn Rawls does.  Working late, she witnesses her boss being gunned down by two men who promptly chase her through the streets at gunpoint. Only when Katy gets on a subway thinking it heads to the local police precinct does she elude them.  Unfortunately, the tram’s heading in the opposite direction to the shuttle station, in fact, where it’s taking all the passengers to a primitive planet called Tritomis-2. Katy reasons that may be the safest place for her until she can find a way to get the evidence she has to the authorities, so she goes along…


…and that’s when things get complicated, because all the passengers are women…women prisoners…offered pardon if they’ll marry the womenless men on the pioneer planet Tritomis-2, a place much like the Old West, where men ride horses and use wagons for transportation while spaceships streak across the sky.  On Tritomis-2, a man’s word is his bond, gunfights are common, and justice is sometimes meted out immediately without calling in the Federation marshal.

Katy’s unaware of all this. She thinks the women are going to be employed by the men with whom they leave the shuttleport. When Sar Trant, owner of Three Moon Station comes along, she agrees to go with him, not realizing the document she signs is a marriage license. Misunderstandings follow, but after Sar learns why Katy really came to Tritomis, he agrees to help her hide out until the year in the marriage contract is up.  The only trouble is…he’s fallen in love with his bought bride and he intends to woo her and win her and make her want to stay with him.


A good many readers have fallen in love with Sar and Katy and at their encouragement, what was intended as only one novel has now grown to three in the series…Three Moon Station, In This Kingdom by the Sea, and The Finer Gentleman, all to be released by Class Act Books. Three Moon Station is scheduled for release in June and In This Kingdom in the Sea, in July, 2013.


“…an out of this world must read…so well written that it’s a bestseller contender, one that I would proudly display in my personal library.”—Long and Short Reviews


“If you like epic style romance that leaves you with warm fuzzies and a desire to revisit the characters, and who doesn’t, you’ll love 3 Moon Station.”--WRDR Review


EXCERPT:
“Mr. Trant. I guess we’d better have that talk now,” she began and he nodded soberly. She walked a little closer, looking up into those bright eyes. Careful, Katy! Don’t get too close. You might fall into that blueness and drown.
“There’s so much we need to discuss. W-we haven’t even talked about how much I’ll be paid.”
“Paid? You expect to be paid for—”
“Of course,” she interrupted. “I believe it’s customary.”
He thought about that a moment. “Guess that tells me something about you I hadna wish to know, Sunshine.”
“After all,” she reminded him. “I do have my own welfare to think about.”
“What would you consider fair payment, Katy?” He asked it very softly, his expression serious.
“I guess that’s up to you. What do you think my services are worth?”
“Truthfully? I doubt I have that much money.” He looked a little flustered. “The women in town…at Larkin’s…ge’ ten Federals per toss, so…”
“I’m sorry,” Katy interrupted. “What’s a toss?”
“Maybe they call it something else on Terra.” He startled her by seizing her shoulders, saying with an earnestness that made her frown, “Katy, I want you to know I’ll ne’er hold your old life against you.”
She smiled at this statement of reverse snobbery. Since she had no intention of ever letting him know that her uncle was one of the richest, and also one of the most criminally unscrupulous, men on Terra’s Northern Hemisphere, she didn’t answer.
Trant went on, “Though if you’re a virgin, I dinna understand how—”
“I am.” Katy flushed. “And I’d appreciate it if you’d quite harping on that fact. It’s not going to affect what I do for you. I swear.”
“But how? I mean…” Trant shook his head, murmuring, “We’re too isolated from Big Planet life here.”
Since she didn’t understand what he was muttering about, Katy decided to name her own salary. “How about you pay me five hundred credits a month? For services rendered?”
“What kind of services?” he asked, suspiciously.
“The usual kind.” She shrugged, wondering why he looked even more confused. “But I think we should get one thing straight. I’m grateful for your saving me from Alwin Marsten, and I fully intend to uphold my end of the Agreement and work hard for you b-but…” Taking a deep breath, she pulled herself free of his grasp. “I won’t sleep with you.”
“Na right now, you mean.” He didn’t look too upset.
“No. Not ever.” She shook her head, adding, “I’m sorry.”
“’Tis I who’s sorry, Sunshine, most definitely. But I do na understand. If you intend to adhere to that contract, how can you refuse to—”
“I’m certain the Federation didn’t send me here to satisfy the lust of some sex-starved colonist, Mr. Trant.”
“Is that what you think I am? A sex-starved colonist?” He didn’t looked insulted, as she’d expected, just a little more bewildered.
“Of course not,” she denied, meaning, didn’t you act like one last night? “Not really.” She took a deep breath. He’d obviously expected it to be so easy. “I’ll be a good housekeeper, Mr. Trant but I just won’t sleep with my employer. I can’t.”
“Employer?” he repeated. His face underwent a startling change, disbelief, amusement, relief, she wasn’t certain which. “That’s what you think I am? Your employer?”
“Of course,” she nodded. “You hired me to be your housekeeper—”
He stopped whatever else she was going to say, by laughing out loud.
“What’s so funny?”
A hand went to her shoulder. “Sunshine, I’m na your employer. I’m your husband.”

Toni V. Sweeney has lived 30 years in the South, a score in the Middle West, and a decade on the Pacific
Coast and now she’s trying for her second 30 on the Great Plains. Since the publication of her first novel in 1989, Toni divides her time between writing SF/Fantasy under her own name and romances often set in the South under her pseudonym Icy Snow Blackstone.   In March, 2013, she became publicity manager for Class Act Books (US) and also Double Dragon Publishing (Canada). She reviews books novels scheduled for release in 2013.