When I was writing LAKOTA HONOR I remembered Stephen King's words in his book On Writing, “If you can make your reader have empathy for your killer, you’ve done it all.” 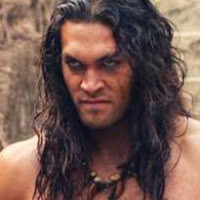 Thus, Otakatay was born. He has become one of my favourite characters so far. (Picture to the left is Jason Momoa, who I saw as Otakatay)

As I plotted out his story I wondered how I was going to make my reader fall in love with a deadly bounty hunter hired to kill women. Anyone in their right mind would hate, despise and be frightened by him.
And so, I asked myself what about this killer would be different than all the others? Why will the reader feel sorry for him—excusing his past transgressions?

I thought about how we treat other people, and why we are attracted to some, and others we steer clear from. Why do people turn from someone who is different? What characteristics would someone have to make people afraid or unsure of them? My answer came right away.
I placed scars on Otakatay’s body. I put him between two races. I gave him vengeance which caused his voice to sound pitted and angry. I created a monster. A man hell bent on revenge. A man who didn’t give a damn about anyone, even women. Here is where I will build my empathy, right?

When I started to delve deeper into this character I stopped and took a few days to understand why people are so judgemental? Why we look at those who are different with distaste or disgust? Are we afraid of them, or is it simply that they do not look, behave or even speak like us?
I can be evil, crude, and hateful. Whether or not they are visible, I have scars too.

That’s when it struck me like a punch to the stomach knocking the wind from my lungs. Otakatay was torn and damaged, a man with wounds from a treacherous past—a past that shaped his life and pushed him to do the things he’d done. He’d been cast aside from the white and red race, judged as a breed and nothing more. He’d watched, helpless as his family had been ripped from him, and he was left alone.

There had been no one there to love him, to show him kindness. Instead he’d been met with hate, disgust, and prejudice of the vilest kinds. He’d embraced those emotions and without knowing it, he’d allowed them to overtake him.

I sat at my desk staring at my computer screen through tear filled eyes…and empathy for my character was born.

Bad Company was the song I listened to while writing Otakatay's scenes. Click to listen.