Young Adult author Kenna McKinnon is on my blog!

One sunny wasp day, once upon a time, in a friend's back garden, SPACEHIVE was born. 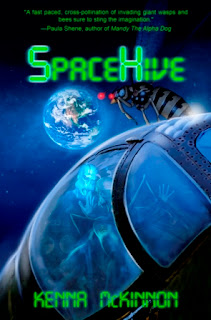 A wasp stung me on my ankle several times. The sting turned into an allergic dermatitis and I was told to keep an eye on it.

The same wasps stung my friend in the front garden. She had an anaphylactic reaction and ended up with ICU doctors worried about her state of swelling and breathlessness.

Thus was born JIVE HIVE, the predecessor to SPACEHIVE. I drafted the plot quickly: a race of giant alien wasps and bees intent on destroying all humanity then populating Earth.

A publisher was interested. Cheryl Tardif of Imajin Books helped hone the plot and scope of this my debut novel; I chopped half of it to carve it from an adult sci-fi to a young adult or middle grade fantasy, we changed the title, and Cheryl accepted it. She sent me two contracts, one for an eBook and one for print. I was elated and jumped at it.

SPACEHIVE is for sale this week from Amazon in eBook format at 99 cents.

Get it now and see what all the BUZZ is about! 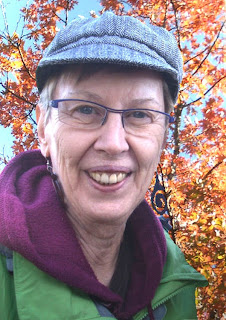 volunteer, sporadic hatha yoga, karate and boxing student, and frequent walker. She lives in a high rise studio suite in the quaint neighborhood of Oliver in the City of Edmonton. Her most memorable years were spent at the University of Alberta, where she amazingly graduated with a degree in Anthropology. She has lived successfully with schizophrenia for many years and is now a senior woman, member of the Writers'  Guild of Alberta and the Canadian Authors Association. She had three wonderful children and three grandsons.

Kenna is the author of SpaceHive, a middle grade sci-fi/fantasy novel traditionally published by Imajin Books; The Insanity Machine, a self-published memoir with co-author Austin Mardon, PhD, CM, including the latest research available at the time of writing; and DISCOVERY – A Collection of Poetry, all released in 2012. Her books are available in eBook and paperback worldwide on Amazon, Smashwords, Barnes & Noble, and selected bookstores and public libraries. Kenna's newest MG/YA novel, BIGFOOT BOY: Lost on Earth, has recently been accepted by Mockingbird Lane Press.