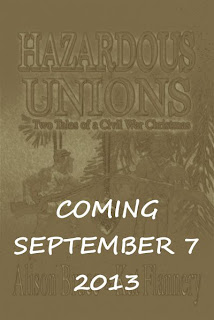 After the death of their father, twin sisters Maggie and Matty Becker are forced to take positions with officers’ families at a nearby fort. When the southern states secede, the twins are separated, and they find themselves on opposite sides of America’s bloodiest war.

Alison and I are super excited about the release of
HAZARDOUS UNIONS, September 7, 2013
We decided to each give away a copy of the ebook...
but you have to earn the chance to win.


Q 1: How many Americans died as a result of the American Civil War?

Q 2: Ulysses S. Grant eventually rose to the rank of lieutenant general and commander of all of the Union Armies. To what rank was he commissioned at the beginning of the war?

Q 3: President Abraham Lincoln issued the Emancipation Proclamation on January 1, 1863. (New Year’s Day after the Christmas celebrated in HAZARDOUS UNIONS.) Who was being emancipated?
a.   All slaves in America
b.   Slaves held in the rebellious states
c.   Slaves held west of the Mississippi

Q 5: “My captain does not answer, his lips are pale and still, My father does not feel my arm, he has no pulse nor will,” In these two lines of Oh Captain, My Captain, Walt Whitman is referring to:

a.  His father
b.  His commanding officer
c.  President Lincoln after his assassination

You can also play on Alison Bruce's page here.