Today I'm chatting with bestselling author, Alison Bruce about her holiday traditions, and the best gift she ever received. You may remember Alison from previous posts. She is an accomplished author with a compelling talent for the written word. I've had the pleasure of working with her on our latest novel, Hazardous Unions: Two tales of a Civil War Christmas.

As the season draws near I thought I'd interview Alison on how she celebrates the most wonderful time of the year!

So without further adieu here we go...

What traditions do you have at Christmas?

We used to spend every Christmas with my cousins in Montreal: minimum six kids, five adults, every year. You could practically set the clock by our family traditions when I was growing up. From the first cup of tea we took in with us to open stockings to the formal tea in the evening when we exchanged tree presents the whole day was a set dance that we played out every year.

Then us kids grew up, got married, had kids, some divorced, some of those remarried and the family got a little unwieldy for us all to get together for the holiday. So, we adapted. I share Christmas with my daughter, son, nieces and significant others. Stockings still come first, but now they don’t get opened until after I pick my kids up from their father’s. We still end the day with tree presents – little not-so-secret-Santa gifts – but in the late afternoon, not the evening, because my nieces have to go to Christmas dinners with in-laws.

What was the best and worst gift you ever received?

The worst gift I ever got was one I bugged and bugged my parents for. I wanted a Spirograph and I got it. What a disappointment! It didn’t work like they showed on TV and it was bor—ring! It taught me a lesson about truth in advertising, however.

The best gift was totally unexpected. My daughter was born December 4. She was a bit of a miracle baby to start with because I conceived her despite using contraception and she survived me having Chicken Pox in her first trimester. Her father and I decided to have a honeymoon instead of a wedding and we went to Disney World once I was over the Pox. Kate’s first gift was bought there. For Christmas, Ross gave me a Mickey Mouse pocket watch. No one else would have thought of it and I still treasure that gift, even though we aren’t together any more.

Despite not being religious, my favourite holiday song to sing is “Angels We Have Heard on High.” We used to sing carols in the car on the way to Montreal and I loved singing the extended “Gloria in excelsis deo” in the chorus. To listen to, however, I love “Little Drummer Boy” by Pink Martini or David Bowie and Bing Crosby.

Three things you can’t survive the holiday’s without?

If you could give any gift what would it be and to who?

I would love to give political and corporate leaders a visit from Christmas Past, Present and Future a la Dickens’ Christmas Carol.

Of course I’m still pretty wrapped up in Hazardous Unions – it being a Christmas book and all. That is, I’m hoping a lot of people will be wrapping up our book for presents. <grin>I’ve just finished editing my next book, Men in Uniform, and am waiting to hear when it will be out next year. I’ve also got a sequel or two for Deadly Legacy to finish. Perhaps I should be asking Santa for more time to write this holiday. 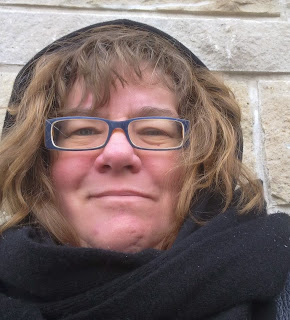 Alison started writing stories for other people when she was twelve. She lost her first novel in the women's washroom at Ryerson University. (No she didn't flush it.)
Copywriter and editor since 1992, Alison has also been a comic book store manager, small press publisher and web designer. In addition to writing, she is the Publication Manager of Crime Writers of Canada, the Arthur Ellis Awards Administrator, and a part-time tech guru to the technologically challenged.