While vacationing in Tatamagouche, Nova Scotia this summer my family and I visited the small museum at the old Creamery in town. There I came across an intriguing room with a large door, four feet taller than my husband and a friendly gentleman, a distant cousin to the lady I’m going to tell you about.

Anna Swan, the 7ft and 5½ inches tall woman known as a giant.

Born August 6, 1846 in Mill Brook, New Annan near where Tatamagouche resides today in Colchester County, Nova Scotia.
Anna was the third child of thirteen, to Scottish immigrants of average height and weight. 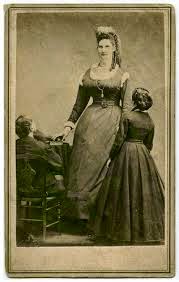 Anna struggled with her day-to-day life living in a small farmhouse, where she could not stand to her full height. She was not permitted to sit in the chairs her family used, for the wooden structures could not hold her weight and she’d broken many pieces of furniture over the years. Upon seeing his daughters struggles within the family home, Anna's father hand-made her a chair suitable for her height and weight.

Traveling did not come easy for Anna. She had to make sure to place her weight evenly on the rail of the buggy before stepping up into the seat, if she did not, she would tip the carriage over or frighten the horses. Anna did not like to draw more attention to her than what she already received. However, it was more important to her to portray a lady and so she took great care when visiting with friends and family to search out the strongest chair, hold her tea very daintily, and be sure to sit up from the sofa before the others.

She was an accomplished pianist, actor and singer and considered a highly intelligent woman. She went on to perform at the Barnum’s museum. 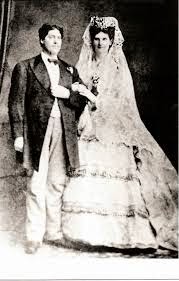 While visiting a circus in Halifax Anna met Martin Van Buren Bates, a giant as well at almost eight feet and 470lbs. They were placed together as the main attraction with the circus and soon after fell in love. On June 17th, 1871 they married in London, England. Where the Queen gave Anna a handmade pocket watch as a wedding gift.

On their return from England, in June of 1874, Martin moved his wife to Seville, Ohio. They purchased 120 acres of land and had furniture made to their specifications. For the first time in their lives they’d be able to live within a home that was built to suit their sizes. The main part of the house had 14-foot high ceilings; the doors were wider than normal, and 8 and a ½ feet tall. The back of the house was built an average size for servants and guests. 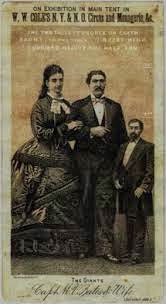 Anna again became pregnant with their second child, but the 24 pound baby only lived 11 hours. To take their mind from the grief of losing another child, Anna and Martin joined the W.W. Cole Tour in the summer of 1879. By 1880 they had retired.

Anna spent the next 8 years quietly on the farm she and her husband owned.  She joined the Baptist church and attended services with her husband every Sunday, sitting in a pew built especially for them. She enjoyed teaching Sunday school and visiting with her friends. 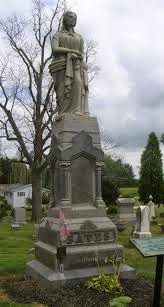 Anna suffered from a thyroid goitre all of her life, which resulted in her size. She died unexpectedly of heart failure in her sleep at her home on August 5th, 1888 just one day before her 42nd birthday. Martin ordered a statue of Anna from Europe for her grave that still stands today. 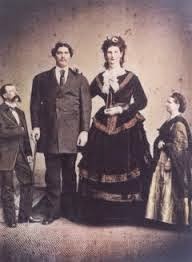 When I stood within the museum and stared at Anna’s dresses, her pictures and the door from the old farmhouse, I grew admiration for the woman known as the giant. In a time where different was not accepted, she excelled despite what others thought of her. She made a life for herself within the circus performing all over the world and rubbing elbows with many dignitaries.


She married a man of her size, which was not likely to happen, and they cherished each other. I wish I could’ve met the 7ft tall woman with a quiet voice and reserved disposition. I’d like to think we’d have been friends.