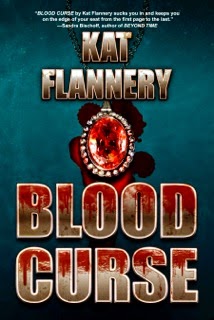 While writing BLOOD CURSE, book 2 in the Branded Trilogy, I had to do more research than I expected. When I was plotting for this particular book, I actually changed the date three times before going back to my original timeline of 1723. This placed me during the Colonial era. I remembered learning in school a bit about the 13 Colonial States and how they were founded, but that was as far as my knowledge went.

Out came the books, and websites. I needed to know certain facts in order to even begin plotting my story. Where would the events take place? Who lived there? What did they eat? What did they wear? So many questions that only researching could answer.

However, I do not want to discuss the research I did use, but rather the facts I found interesting and appalling at the same time, that I did not use. I cannot lie and tell you I was not intrigued to read everything I'd found on customary lifestyle back then. I couldn't get enough of it...the reason I am a historical writer.

In order for my story to not be bogged down with realisms like uncleanliness, bed bugs, teeth brushing, etc... I needed to either not include some of the details I'd found, or romanticize them so my reader wouldn't be repulsed.

And so...like any historical fiction writer, I did the latter and plotted my story around the gory details of the lives that lived hundreds of years before us. 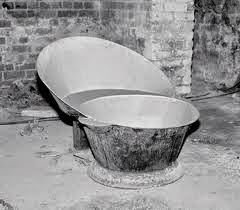 The labor and time it took to draw a bath did not appeal to most and therefore was put off as a chore rather than a pleasure. In fact, everyone had body odor back then, so it was unnoticed among each other and became somewhat of a common smell. For those sensitive to the smell a handkerchief doused in perfume was held over the nostrils and mouth.

Bathing rituals when done were often a family affair. The tub would be filled allowing the head of the house to bathe first, then all the other males, the women and lastly the children. The water had to be black by then and I’m sure smelled awful. 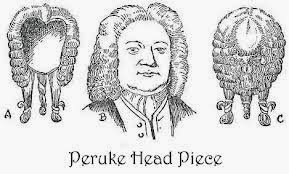 Perukes: These were the white haired wigs men wore. Powdered and scented with lavender or orange oil to rid the stale smell. The wigs were curled at the sides and tied at the nape. Some longer than others, but all hung past the chin. Perukes came into fashion during the 1500’s in England because of the syphilis outbreak. Men used them to disguise their STD, which resulted in baldness; open sores on the body including face and head, and could also lead to blindness. The headdress was not looked upon as fashion but rather a necessity at hiding ones horrendous features.

In 1655 the King of France, Louis XIV commissioned 48 wig makers to help hide his balding at the age of 17. His cousin Charles II King of England also did the same thing and the fad caught on. Soon England’s higher and middle classes were wearing Perukes.

The fashion carried on throughout the colonies and most everyone wore a headdress of white goat, horse or human hair. These heavy, and often filled with nits, hair pieces would go unwashed for months. 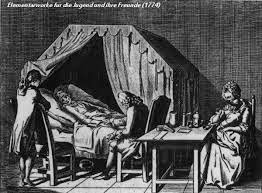 Disease: Due to the uncleanliness of the people and their belongings disease ran rampant throughout the Colonies. In the early days the people had no knowledge on how to fight the sickness, often being the first time they’d seen the disease.

As time passed physicians grew an understanding of how to aid and heal the sick. But death was still a very common outcome to most who suffered from them.

Epidemics of Small Pox, Yellow Fever and Plague killed thousands. These diseases purged the Colonies ceasing all work, closing businesses and caused the people to flee the country or go into hiding.

At one point the death rate for Yellow Fever was so high people had to work day and night to bury the dead. Malaria, Typhoid, and Beriberi were all common diseases that could lead to death if not treated.