Common Herb & Vegetables Do More Than You Think...


Herbs, Plants and Vegetables have been used to aid the sick and injured throughout history. While
researching for my novella, FERN I came across the medicinal use of certain herbs we eat everyday. I also stumbled upon Nickolas Culpepper, an English physician, botanist, herbalist, and astrologer who lived during the 1600’s. He wrote Culpepper’s Complete Herbal remedies book (which I reference in my novella) in 1653, that contains herbal and pharmaceutical information.


Below are a few of the herbs and vegetables I used within my book:


Sage: Has been used as far back as the ninth century for medicinal purposes. In the sixteenth century sage tea was brewed to help with the common cold and build up immunities to sickness. Sage was also used to ward off infection and stop bleeding. The American Indians believed that by mixing hear grease with the plants leaves to make a salve and placed upon open wounds, or rubbed into sore muscles it would cure it. The leaf was also used to clean teeth.

Rosemary: Used not only for its culinary effects, but also to aid in helping those with stomach ailments, digestive disorders and headaches. The scented camphor oil within the leaves was used to help the circulatory and nervous systems.

Thyme: This along with sage, rosemary and oregano are wonderful for the immune system. Culpepper says thyme is a “Noble strengthener of the lungs” The herb loosens thick mucous and congestion. It is also used topically for infections, joint pain, sprains, and strains.

Garlic: Is known for it’s strong odor and flavoring your food, but did you know that Garlic was also used to help heal infection? Roman soldiers carried garlic with them to ward off infection and disease. During the Civil War and World War I medics used garlic so extensively on the battlefields to treat and help prevent gangrene and infection, that there became a shortage of them.
Fresh cloves were eaten, boiled, or placed directly on an infection to draw out the puss. 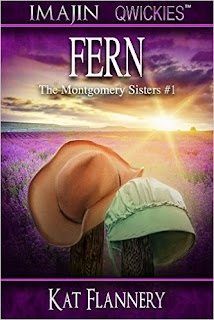 Can one woman heal the heart of a lawman?

A gardener who uses plants to heal, Fern Montgomery is an outcast who refuses to be pushed out of town. When her friend is murdered and all fingers point to Fern as the only suspect, she must find a way to prove her innocence while fighting off unwanted feelings for the sheriff.

Sheriff Gabe Bennett has his mind set on arresting Sarah Fuller’s killer. But his key suspect isn’t what he expected. He soon realizes there is more to the quiet gardener than he’d first anticipated. As passion blooms, Gabe is forced to face his feelings—and the woman who has stolen his heart.


My good friend and fellow Imajin Books author, Kristina Stanley has released her second book, BLAZE in the
Stone Mountain Mystery Series and it looks good!

Instead of exchanging vows, Kalin Thompson spends her wedding day running from a forest fire near Stone Mountain Resort, and the pregnant friend trapped with her has just gone into labor. Meanwhile, Kalin’s fiancé, Ben Timlin, hangs from the rafters of a burning building, fighting for his life. Can the situation get any hotter?

When the fire is declared as arson, finding the firebug responsible becomes Kalin’s personal mission. In the course of her investigation as Director of Security, she discovers that some people will go to extreme measures to keep her from exposing their secrets.

Kristina is having a book launch on Sunday, October 25th to celebrate the release of BLAZE. A meet and great online, with lot's of great prizes to be won!

When Kalin Thompson is promoted to Director of Security at Stone Mountain Resort, she soon becomes entangled in the high-profile murder investigation of an up-and-coming Olympic-caliber skier. There are more suspects with motives than there are gates on the super-G course, and danger mounts with every turn.
Kalin’s boss orders her to investigate. Her boyfriend wants her to stay safe and let the cops do their job. Torn between loyalty to friends and professional duty, Kalin must look within her isolated community to unearth the killer’s identity.

My review of DESCENT...

Descent is a riveting tale filled with action, mystery and betrayal. A murder in the small ski village of Stone Mountain will have the reader immersed in a game of cat and mouse as each character presents a possible motive. Ms. Stanley has an impeccable talent when it comes to description, and the crafting of her characters. I loved Kalin Thompson, the main protagonist, her fears, and wit were that of any real person and I related to her. A gripping account of who-done-it, Descent is sure to stay with you long after you've finished it. I will be reading the next book in this series! Bravo, Ms. Stanley!