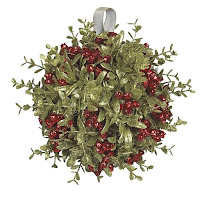 What is Mistletoe and where did it come from? I'd been pondering this idea a while back while plotting out a Christmas book for next year, and I came across this post I'd written for another blog years before. So I thought I'd repost it here.

We all know that when you stand under the mistletoe a kiss is sure to be in your future, but where did this age old tradition come from? Who thought to pluck the berried leaf from the apple and willow trees to use as a kissing tool? 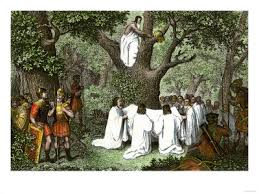 Thought to bring prosperity and protection against evildoers, the mistletoe was held sacred and magical by the ancient Druids in the late 1500's. Custom states that on the sixth night of the moon during the summer and and winter solstice, white priests would cut the mistletoe from it's tree with a golden sickle. Along with their sacrifices and prayers, the Druids believed the mistletoe would grant them prosperity.

Throughout centuries the tradition of the magical mistletoe carried on.

In the Middle Ages branches of mistletoe were cut and hung from the ceilings to ward off evil spirits. In Europe the mistletoe was placed over home and outbuildings to protect against the entrance of witches.

Mistletoe was also used as an offering of peace within arguing spouses and on the battlefield. 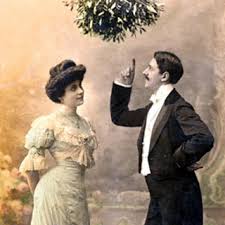 The kissing under the mistletoe originated from Greece where it was believed that a kiss while
standing under the greenery brought on fertility and long life. In later years the British created the kissing ball, and for each kiss a berry was plucked from the sprig. Once all the berries had been taken no more kisses were to be given. A lady would stand under the mistletoe, to show she was eligible, and wait for any suitors to kiss her. If not kissed before all the berries had been picked, it was believed she would not marry within the coming year.

The tradition of the mistletoe has come into the homes of many throughout the years, and whether you believe it to be magical or not, it is the lighthearted fun that the mistletoe brings...and maybe even a kiss. 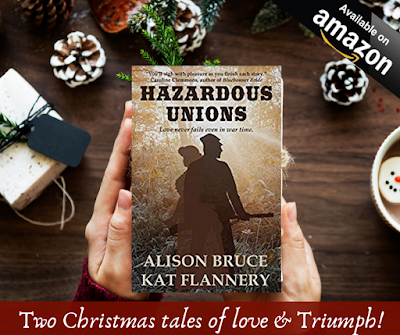 Posted by Kat Flannery at 15:45 No comments: